You may have been lucky enough to come across a Northern Spotted Owl while hiking through a forest in Marin County. To be in the presence of this species is a true gift, and a reminder that a healthy ecosystem is a delicate matter. The Northern Spotted Owl is a threatened species, protected both by the state and federal governments under the Endangered Species Act. More importantly, Marin County, the Northern Spotted Owl’s most southern range, houses one of the last stable population of them in the world.

So why are Northern Spotted Owls drastically declining all over the Pacific Northwest, and why has Marin been able to maintain a stable population up until this point? While habitat loss remains one of the two primary threats due to logging of old growth forests, the second is the invasion of the Barred Owl, which has become a large complex threat to the Northern Spotted Owl.

Originally only found on the east coast of the US, the Barred Owl has made its way to the west coast due to changes in habitat and climate. The first known sighting of a Barred Owl in Marin was recorded in 2002, and sadly, the sightings are rising. The Barred Owl is larger, more aggressive, more adaptable, and an opportunistic hunter. Because of these traits, they are competing with the Spotted Owl’s food source, disrupt nesting, and are pushing the Spotted Owls out of their territory. Spotted Owls are not the only owl species at risk of population decline due to the rise of Barred Owls in the Pacific Northwest. The northern pygmy owl and western screech owl are also losing habitat, or being killed and eaten by the Barred Owl.

While Marin County does not have to worry about the threat of logging, we should start worrying about Barred Owls, and what their growing presence means to the long term survival of the Northern Spotted Owl. The National Park Services (NPS), Point Blue, Marin County Open Space, and Marin Municipal Water District have begun efforts in monitoring Barred Owl activity in Marin, but we also need your help!

Should you come across what you believe is a Northern Spotted Owl or a Barred Owl, we ask that you report it to the following agencies ASAP.

Please provide the size, eye color, ear tufts, markings, behavior and location. If possible, also provide photo(s) and/or recording obtained using the Audubon Ethical Bird Photographer and Videographer code of conduct. Although the two owl species look quite similar, the easiest way to differentiate the two is the feather pattern on their chest. The northern spotted owl will have a spotted brown and white pattern, while the barred owl has a barred brown and white pattern. Please note the photos that illustrate these differences clearly.

It is said that Marin County is one of the last defendable populations of the Northern Spotted Owl. It is time we step up as a community to make sure we help protect this threatened species before they are gone forever. A diverse ecosystem is a healthy ecosystem, and when we start to see the diversity disappear, we will start to see our ecosystem change in unhealthy ways. Thank you for helping us protect our beloved Northern Spotted Owl.

You can also read this article in the Marin IJ HERE 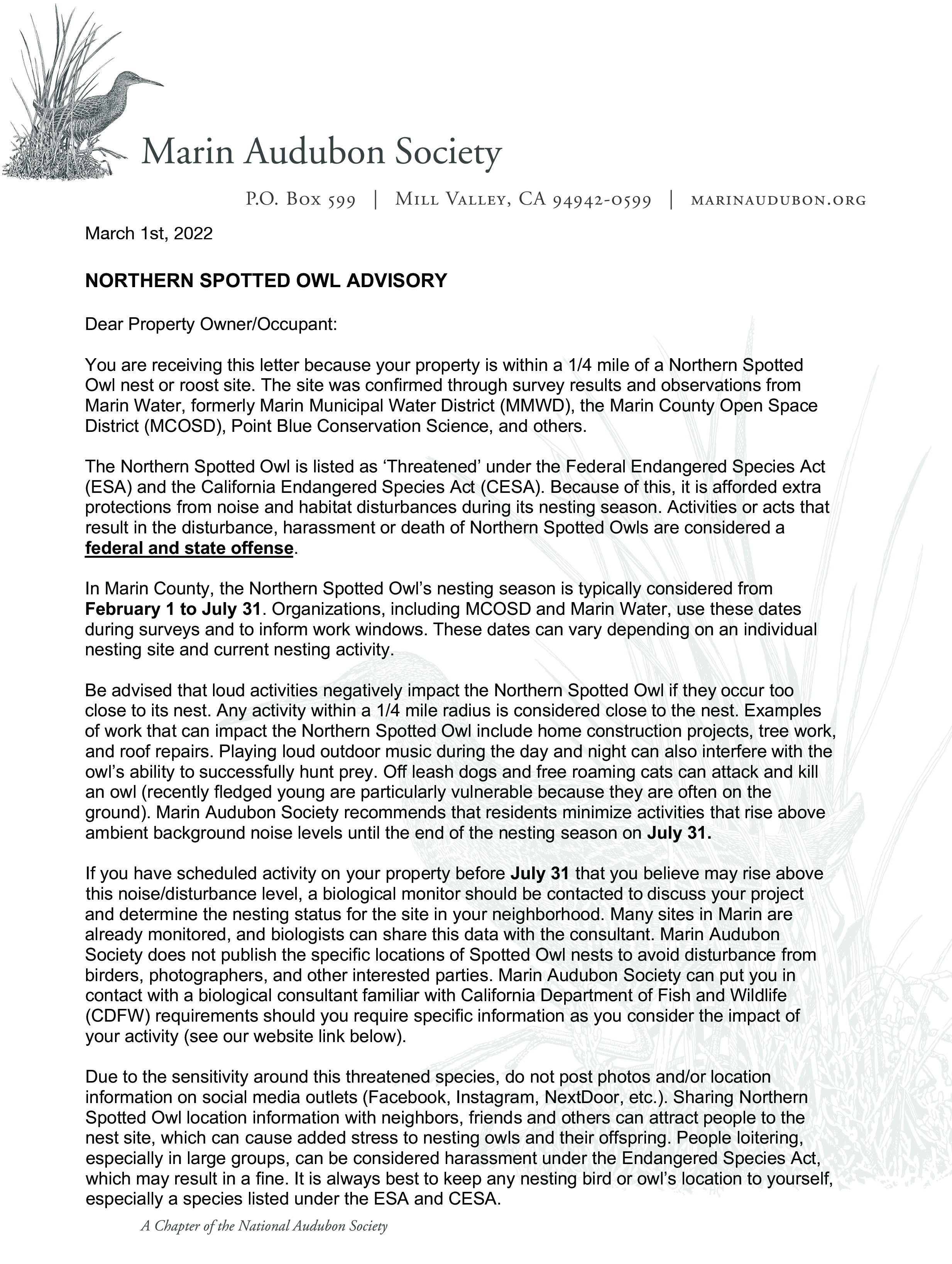 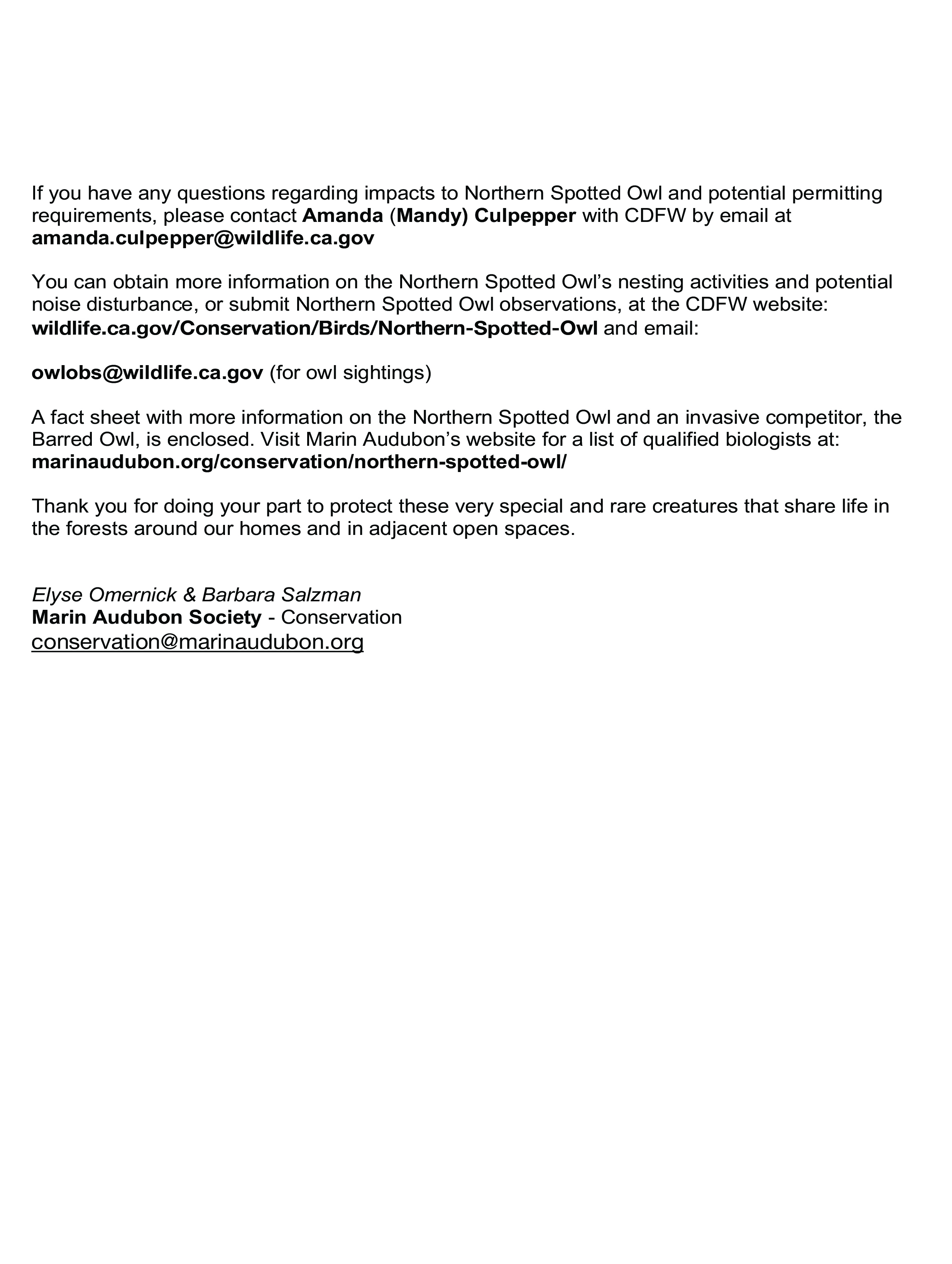 Please contact one of the below biologists should you live within a Northern Spotted Owl buffer zone and have a question or concern regarding a project that falls within their nesting season. Spotted Owl nesting season runs from February 1st – July 31st each year. It is a federal and state offence to “take” (kill, harm, tamper with, or harass) these owls as they are protected under the Federal and State Endangered Species Act. Noise pollution and unnecessary human activity near Spotted Owl buffer zones should be taken very seriously. 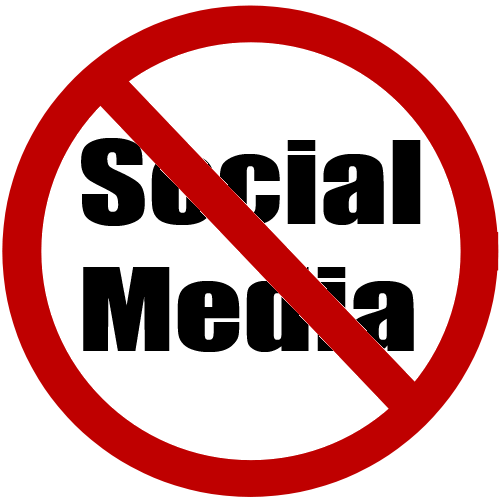 Sharing NSO location information on social media platforms such as NextDoor, Facebook and Instagram, can lead to groups of people disturbing the owls. While sharing photos with friends and family is usually harmless, never share location information. Loitering near NSO nesting or roosting sites, especially in large groups, can stress the owls and can be considered harassment under the Endangered Species Act. Harrassing NSO could result in criminal citations and fines. 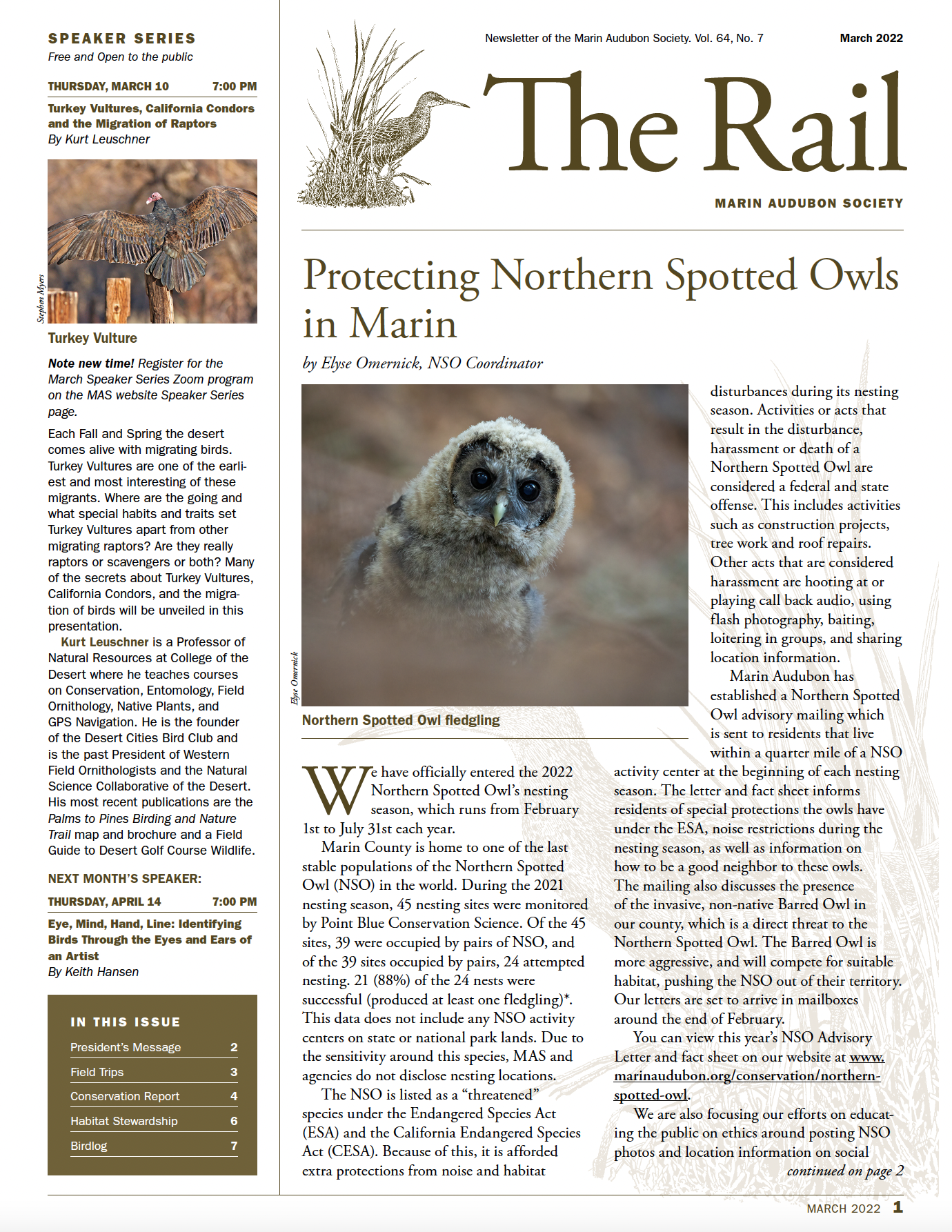 Preventing the Pacific Northwest icon’s extinction calls for aggressive intervention, including killing another owl species. Will we act fast enough?

An article by the National Audubon Society 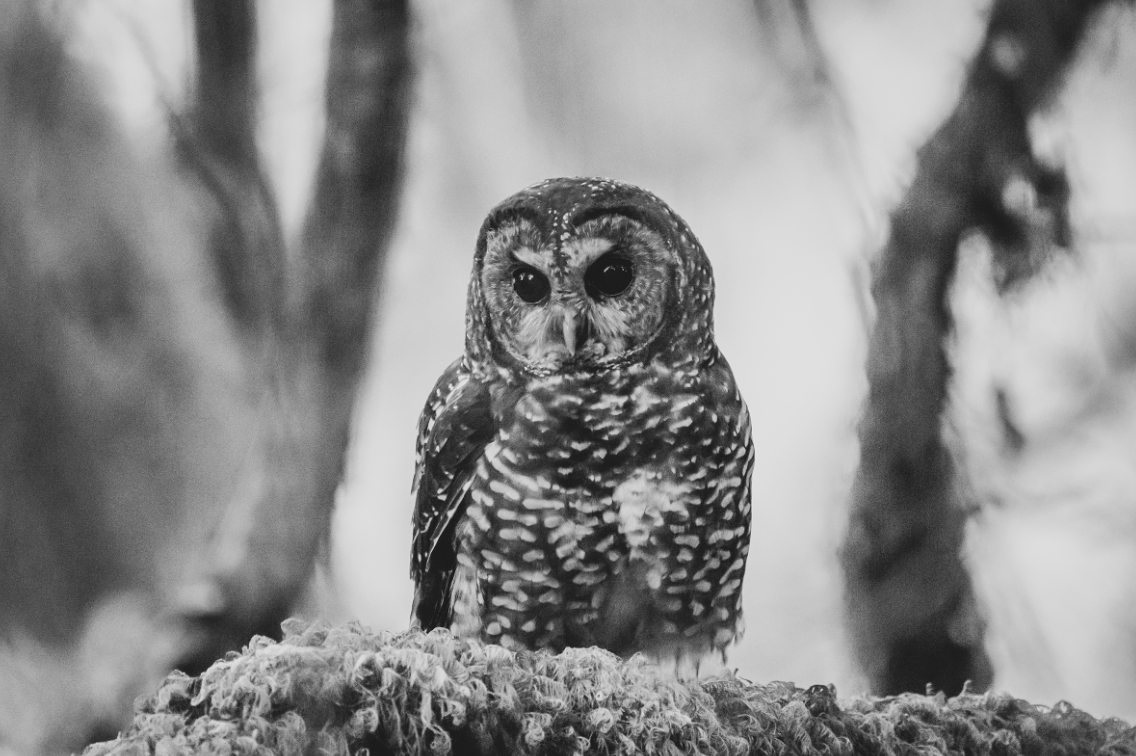 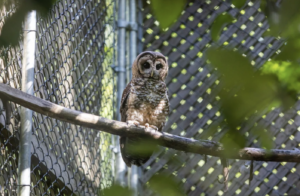